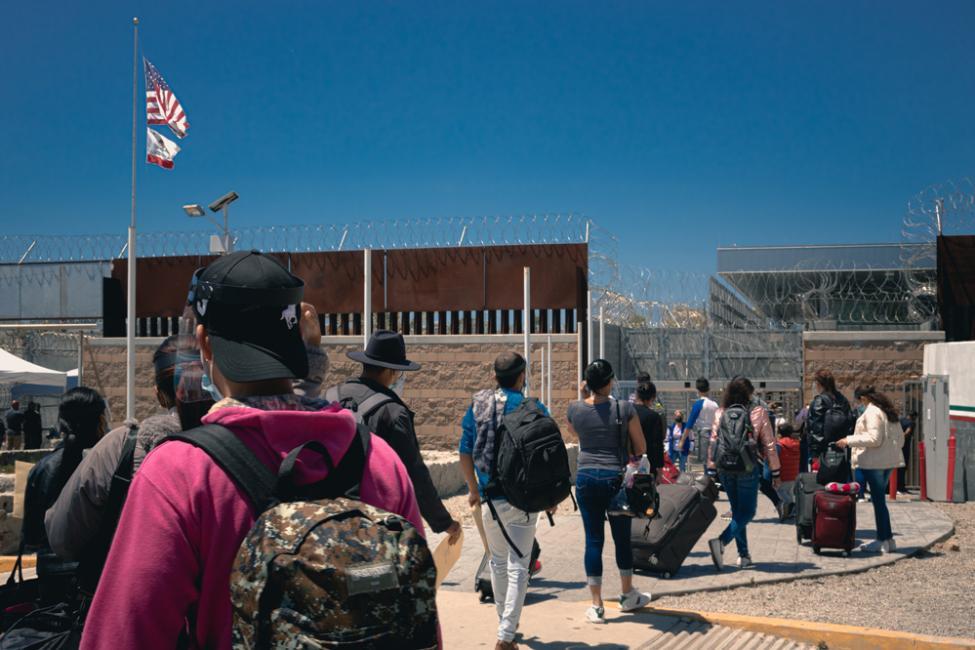 Tijuana – Archival image of a group of migrants in Northern Mexico approaching the border to enter the USA in an operation accompanied by IOM staff. Photo: IOM/Alejandro Cartagena.

Geneva – The International Organization for Migration (IOM) and UNHCR, the UN Refugee Agency are shocked and deeply saddened at the deaths of dozens of people discovered in an abandoned tractor-trailer in the US state of Texas yesterday.

The organizations call for a vigorous investigation and prosecution of all those responsible.

While the full circumstances surrounding this tragic incident, including the nationalities of many of the deceased, are yet to be known, the bodies of at least 50 people have so far been recovered from a truck in San Antonio, roughly 250km (155 miles) from the border with Mexico. Media citing local authorities report survivors, including children, are recovering in hospital from heat stroke and exhaustion.

"This is not the first nor will it be the last such tragedy as people smugglers continue to prey on migrants and other vulnerable people who are only seeking a better life for themselves and their families,” said Michele Klein-Solomon, IOM Regional Director for Central and North America and the Caribbean.

“We mourn with the families the loss of their loved ones and call on authorities on both sides of the border to vigorously investigate and bring to justice all those who, through their callous disregard for human life, contributed to this terrible incident.”

According to IOM’s Missing Migrants Project, nearly 3,000 people have been reported missing or died trying to cross the border from Mexico into the United States since 2014. This latest tragedy pushes the total number of deaths for the first six months of the year to 290.

“Without sufficient pathways to safety, vulnerable and desperate people will continue to be preyed upon by smugglers or forced to resort to desperate measures to cross borders. Among those taking these journeys are asylum seekers and refugees fleeing violence, persecution and human rights abuses, as well as migrants, victims of trafficking and others,” said Matthew Reynolds, UNHCR Representative to the United States and the Caribbean.

“What is needed are safer alternatives to these dangerous irregular movements, ensuring expedient access to asylum procedures for those seeking international protection. Preventing the loss of life must be the priority for all.”

People traveling along this route are routinely exposed to grave human rights violations and exploitation by criminal gangs.

IOM and UNHCR continue to call for concrete action to reduce loss of life along migratory routes around the world by encouraging regional cooperation to protect the rights and lives of people on the move, while addressing the root causes of displacement and unsafe or irregular migration in line with the objectives of the Global Compact for Safe, Orderly and Regular Migration and the Global Compact on Refugees.

Recently the heads of nine UN agencies and three international organizations called upon governments and other actors to save lives and prevent migrants from going missing. The statement specifically called on States to respect obligations under international law, including human rights law, upholding the right to life and right to health for all individuals, irrespective of nationality, ethnic or social origin, gender, migration status or other grounds, the right to family life, the best interests of children, and the absolute prohibition of enforced disappearance or arbitrary detention, amongst others.

*This press release is originally published by IOM Global.

IOM Statement on the Los Angeles Declaration on Migration and Protection